We are drawing near to that time of year when, as the Charity law requires, we hold our Annual General Meeting. I know that such an event does not set the pulse soaring with joy and expectation for many people. However, it is an event at which we do some stocktaking, look back over the achievement of the past year, and set our sights on what is ahead of us. There is no doubt the past 12 months have been challenging for our organisation. In response, we have grown in so many ways, in order to meet the demands before us here in York. To fulfil our role in the future, as we develop the city as a place of Sanctuary, we shall be hoping for your continued support.

Make a note in your diary of the date of our meeting. Come and join us. We look forward to seeing you there.

At the Quaker Meeting House, Friargate, YO1 9RL

Refreshments are available from 6 pm, and the meeting will start at 6.15 pm.

We aim to finish by or before 8 pm

At the AGM we elect members to the Board of Trustees. This year we are pleased to be nominating Professor Richard Bourne to serve a term of office with the Board. We currently have 2 further vacancies and are seeking nominations to complete the membership, which is a maximum of 9 people.

The Trustees are the official body running and administering the York City of Sanctuary charity. Members meet together around 4 times a year, and convene the AGM. Some of the Trustees have specific roles within the organisation, such as Chair, Treasurer, and Co-ordinator, and meet one another more regularly. Others, as well as decision making, keep us updated on partners and organisations with which we have links, such as York St. John University of Sanctuary, The York Holocaust Memorial Planning Group, York University of Sanctuary, and York Interfaith Group, to name but four.

In inviting applications to the Board, we are particularly interested to hear from anyone with experience of working in the educational environment of primary or secondary schools. We are looking to develop our activity in encouraging the growth of Schools of Sanctuary here in York. As yet, our city does not have a school which has reached that point. We would welcome a Trustee with an interest in helping us move that aspiration forward.

We also look to have applications from those who have lived through the experience of being a refugee in the UK. It is important that our Board reflects the diverse range of people we are representing, and provides opportunity for those who may at some point have used refugee support services, to add their voice and wisdom to our decision making process.

It may be that you are reading this newsletter, and are aware that one of the above descriptions fits you exactly. Excellent! With this newsletter you will find an application form, supplied with you in mind. The next step is for you to complete the form and return it to [email protected] and I will be in touch with you.

On the other hand, it may be that none of the above fits your profile, but you know someone who does. Don’t take it for granted that they read our newsletter. Support us by pointing out our search for Trustees, and encourage them to fill in the application.

Or, none of the above fit your profile, and you don’t know anyone who does. However, you have a skill which you can offer our charity, and you’d like us to consider what you have to offer. Do let us know by using [email protected]. For example, at the moment, we are looking for someone to administer our Gift Aid Programme (GAP). The number of donors using this form of efficient giving has risen in the past year, and we need to have someone who has the previous or current experience of GAP and the space to administer it for us. Could that be you?

The Trustees are at the heart of our organisation. They meet and make decisions which are significant and important. The charity cannot function without them. As the Co-ordinator for the past 10 years, I thank every member of the Board, past and present, for their generous gift of time, display of wisdom, and imaginative decision making which has brought us to our present place.

The long running saga of the potential use of Linton on Ouse former RAF base as a centre for up to 1,500 single male asylum seekers is now over. So comes to an end a great deal of stress and anxiety for the people of that community. It also ends an extra-ordinary story of Home Office inflexibility, and lack of concern about the harm its proposal was inflicting on the local community.

Having been the lead Government Department in this story from the day it broke, the news that the proposal was being withdrawn was announced initially by the Defence Ministry, who said that they had taken back their site offer from the Home Office, and would ‘explore other more suitable uses for the site’. An announcement within these last days from the Cabinet Office has made clear that the decision not to proceed with the plan is definite and final.

It is strange that the Home Office has been silent on the cancellation. This was one of the projects announced by Boris Johnson on the same day as news came that the former Home Secretary(Priti Patel) was, at that very moment, in Rwanda, signing a deal to give £120m to that Government in return for them receiving plane loads of asylum seekers with single tickets from the UK. The two plans seemed to be connected in some way.

Equally extra ordinary is the sheer arrogance of the Home Office, who were well aware that they had no planning consent for the development, and no plan for minimising the impact on the infrastructure and environment of the local community. In consequence, their proposal faced a legal challenge from the Hambleton District Council. They were equally aware of the distress, concern, and opposition expressed loudly and clearly by local residents, who had not been consulted about the idea and learned about it through the media.

Nevertheless, they pressed ahead with plans, anticipating that they would overcome any local opposition. The budget for developing and running the centre was estimated to be around £32 million. The Home Office has declined to reveal how much they spent on defending their decision to proceed, and beginning exploratory work on the site.

They also awarded a contract with Serco to become responsible for managing the site, and providing staffing. That would be yet another lucrative Home Office deal made with the company, who already operate immigration removal centres such as Brook House. At that centre, independent observers have recorded a surge in incidents of self-harm, and guards using dangerous use of force to deal with suicidal detainees.  It was disclosed that part of the Linton on Ouse site may be used as a detention and removal centre overseen by Serco. Presumably people bound for Rwanda would have been kept there.

Of course, that contract is now torn up as a result of the reversal of the plan. In normal contracts, compensation would be due to Serco for covering their costs incurred in advertising and hiring staff members in advance of an opening of the site, and for the loss of expected income to the company. As of the 1st of October, neither the Home Office nor Serco have responded to requests asking if compensation has been paid. It would a very strange contract indeed if that was not the case.

We can surmise with some degree of certainty that several million pounds of taxpayers money has been spent on a scheme that has come to nothing. Has the Government learned from its errors? A recent announcement tells us that over £300m is now to be invested in building new Home Office detention centres where asylum seekers will be held before their flights to Rwanda. No locations have thus far been revealed.

Do bear in mind that so far, £140.5m has been spent on the Rwandan project, including hiring planes with no passengers. The Home Office claims that ‘the UK taxpayer expects us to deliver value for money’.  So, when will that be?

Still looking for hosts in the Homes for Ukraine programme

People continue to leave Ukraine as Russia escalates its bombing of cities across the country, some of which up to now have escaped the worst of the war. The offer to provide £350 a month for hosts still stands, as does the support which the York-Ukraine Support Team (YUST) provides, alongside the City of York Council, voluntary groups, and a growing network of Ukrainian-led activities which those arriving in York can join.

We continue to need hosts, and if you have not so far offered, and would like to explore the idea, do please contact us; [email protected]

As people move out from being hosted, and look for rented properties, they meet the reality of York’s housing situation. The city is desperately short of affordable rented accommodation. This is not a new problem for those who have lived here for a long time. The fact is that hosts have committed to giving a home to Ukrainian families or individuals for six months, and that has been a generous and welcome act. However, the time is coming for some guests to move on. We need offers from private landlords and agents who may have accommodation available. Do get in touch with us if you have a property to offer or a lead for us to follow.

York City of Sanctuary had an away day on 24th September, when a group of Ukrainians, led by Rebecca Russell, and with our Chair of Trustees, Ahmed Khaleel also in attendance, attended and took part in the Yorkshire Integration Festival, held in Leeds Millennium Square. They provided a colourful display of Ukrainian art and craft, and national costumes were also in evidence. Singing and dancing were heard and seen. It was a great event in which people from many parts of the world, for whom the UK is now home, came together to celebrate the reality of integration. Thanks to everyone from YCoS who put in a good deal of hard work to plan and contribute to the Festival. it was a long day, but worthwhile. 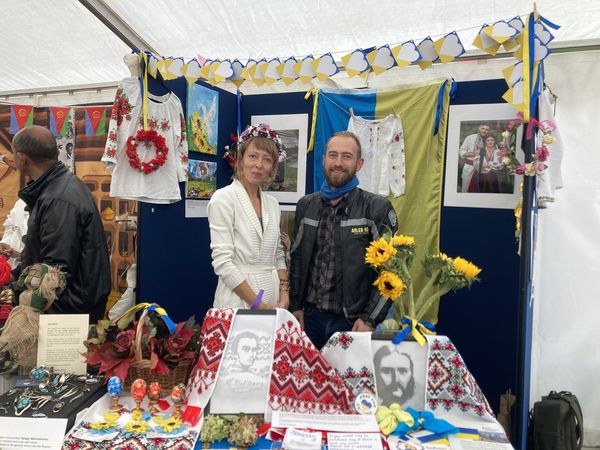 Saturday 8th September saw a gathering in York to mark the 50th anniversary since the arrival of Ugandan Asians in the UK, after being expelled by President Idi Amin. York University played host for the day. A number of speakers, some of whom arrived in the UK at that time, and others who are part of the following generations, gave us an account of their experiences. We watched a film recorded at the time by the BBC of the arrangements made to accommodate the arrivals in camps across the country. Singing, dancing, drumming, and food were all part of the celebration. It is fitting to record the part that so many of those arrivals have played in enriching and enhancing every aspect of the life and culture of the UK, including here in the city of York. Well done, to all who organised a wonderful day.